Can't find your erector set? Try this instead.

This applet lets you make ball and stick models that wiggle and bounce under selectable stiffness, friction and gravity. You can make some sticks work like muscles. Can you make your model crawl or walk?

Sodaconstructor was written by computer programmer+artist Ed Burton. For an interview with Burton in which he talks about the creation of the sodaworld and its subsequent evolution, see this article at the Institute For Figuring.

How much time did you waste with soda? 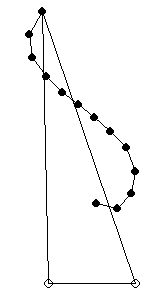 The two long sides of the triangle alternately stretch and shrink so as to whip the chain of beads back and forth. (Hollow balls are anchored, solid balls are free to move.)

Motivated by certain aspects of your romantic life, eh? ;-)

This is the simplest walker I've been able to devise. Two legs extend down from the apex of the rigid triangle and stretch to lift and carry it. Muscles attach to the other two vertices to drive the alternatly extending legs through complete steps. A one legged version of this works fine too, though it hobbles forward at half the speed.

Constructor doesn't offer a way to save models. I've been using screen capture (alt-printscreen) for the pictures I've posted here. I just thought of a better scheme though ... soda should offer to email a working version of my creation to the destination of my choice. I'd much rather treat my friends to cute little soda models than pictures of my mug such as those I sent from SonyMetreon.

It does now! And there is a Zoo for your pets. Great fun

Wow, I actually feel bad for the things when I drag them around or pick them up and hold them above the ground. I bet my 5 year old is going to get a real kick out of this...

I've tried to show constructor to other people but it was hard for them to understand the sine-wave muscle pattern. Constructor should offer a square wave model too. BrianMcDaniel

The first time I shook one of the models, I laughed so hard I cried! Virtual Rag Dolls! Now I need to make a virtual terrier to shake it to death!

Inspired by the Soda Constructor, I spent two weeks scouring the net for all of the information I could find about modeling 2D masses and springs, to create my own toys at http://MrFeinberg.com/physics/ . My stuff is not editable--I ran out of steam after I got as far as you see there--but it does include source code, for the interested. -- JonathanFeinberg

It was only today, July 22, 2006, that I actually focused enough to get over the initial learning curve. At OMSI -- the Oregon Museum of Science and Industry -- they had some workstations set up to run SodaConstructor as part of a robots exhibit. Once I got down the basics of sticks and muscles, the thought occurred to me -- could I make something that looked like a beating heart? (Those of you that know me well might see why that would occur to me). My first attempts were very encouraging, and I'm starting to get some interesting behaviors. --StevenNewton

EditText of this page (last edited July 22, 2006) or FindPage with title or text search